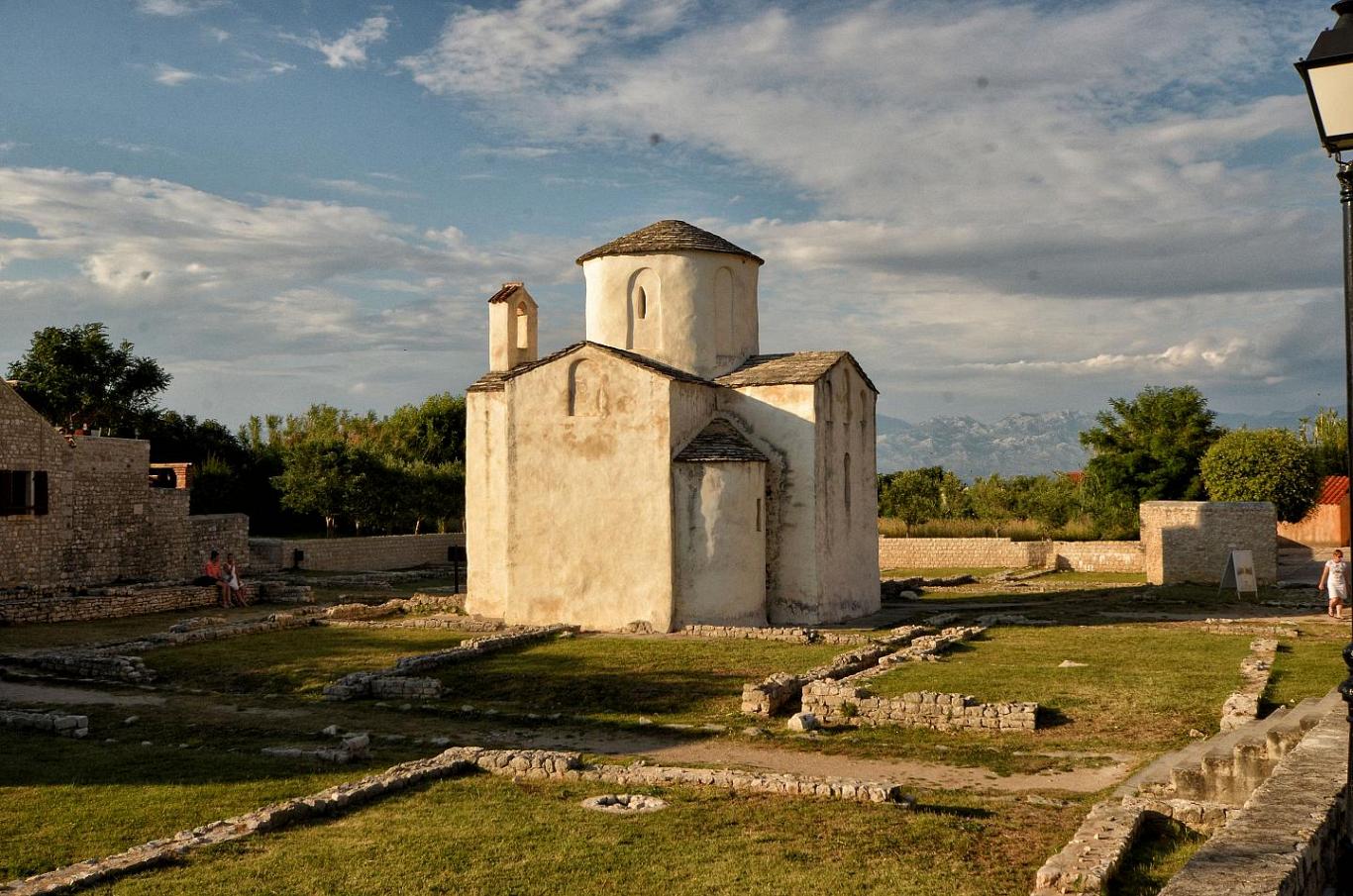 Just fifteen kilometers from Vir, the town of Nin is located, a small place of long and rich history and important tourist destination in North Dalmatia. It is situated in a lagoon on a small island that is connecteD with the mainland by bridge, and it is surrounded with sand beaches. During Medieval times, Croatian nobles used to reside there which makes Nin a true royal city. The church of St. Cross that dates from that period is the world’s smallest cathedral. In the near vicinity there is Nin Saltworks that can be visited and learn about the procedure of sea salt extraction. 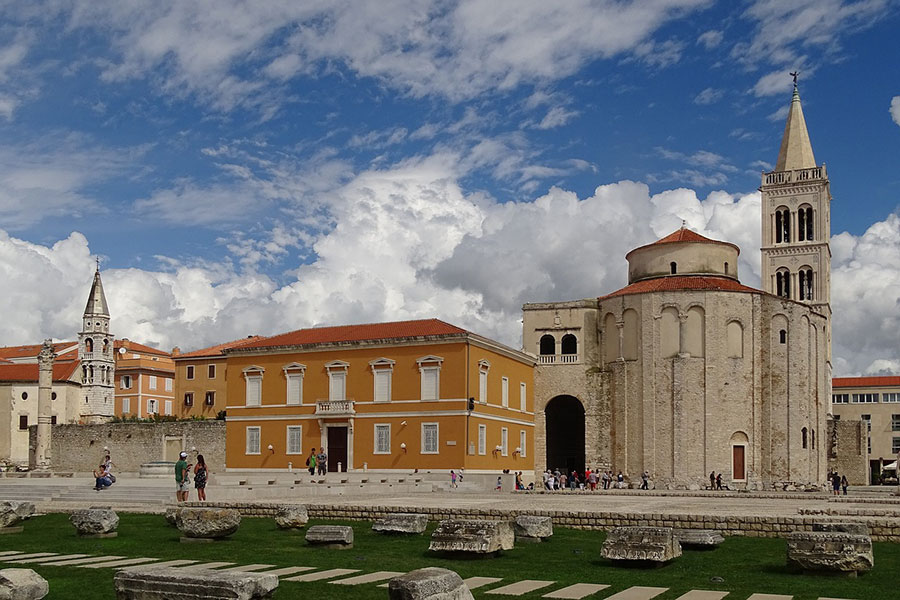 Zadar is located 26 kilometers from Vir and it is an administrative and economic centre of north Dalmatia. It is a town with rich history and cultural tradition, and by strolling down its narrow stone streets and alleys we will find both modern attractions, unique Sea Organ and Greeting to the Sun installation, and old monuments such as churches and remains of the Roman forum. Zadar is a modern town bustling with life and it provides great opportunities for various activities so the fans of shopping and having fun will not be disappointed. It is a place where tradition and modern way of life meet, where the busy working day hours give place to relaxed evenings by the sea, where one leaves with many positive impressions and unforgettable memories.

Although this National Park is in another region of Croatia, it takes only an hour and a half drive to get from Vir to Plitvice. Located in the mountain part of Croatia, Lika, on slopes covered in thick forest, the oldest Croatian National Park, Plitvice Lakes, is sure to make every visitor breathless. Sixteen emerald green and blue lakes cascade down the slopes from one to another, interconnected with numerous falls and creeks, divided by tufa barriers. Water supply is brought through nearby rivers and streams. Crystal clear water, clean mountain air and lush vegetation are a true treat for all senses. The Lakes can be seen by strolling on walking paths, and there is a boat ride on the largest lake Kozjak. Many forest animals are nothing unusual there, and besides the rich fauna there is also a multitude of floral species where orchids take special place as there are around fifty different types of this beautiful flower growing in the park. One of the main attractions of the Park is Veliki slap which measures the impressive height of 78 meters and it is the tallest waterfall in Croatia. Lakes are not the only natural attraction, there are many caves as well. There are around 10 of them and Golubnjača and Šupljara caves are opened for visitors. 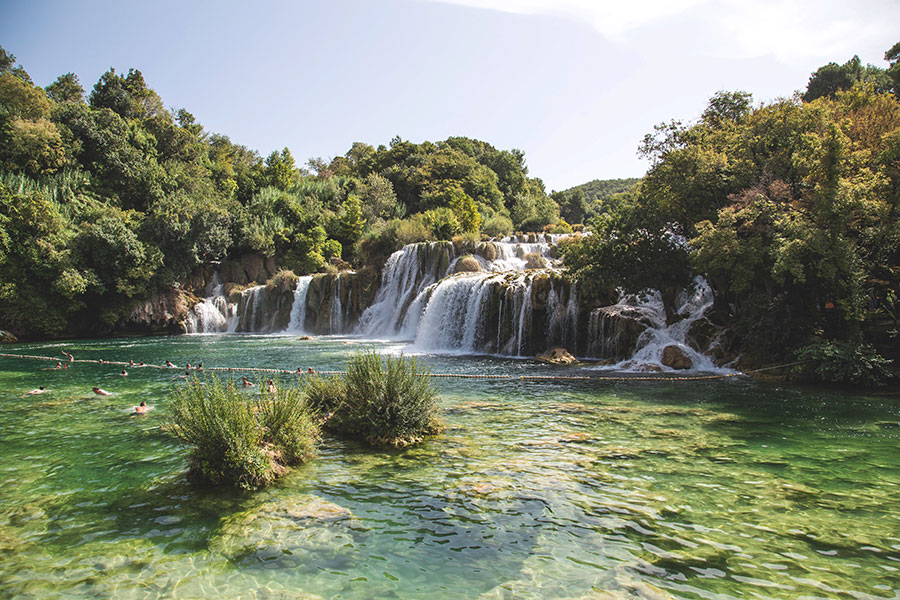 It takes one hour drive to reach Šibenik from Vir, and in that town’s inland Krka National park is located and it includes the entire flow of the river that bears the same name as the Park. Krka river meanders through rocky landscape and creates a truly magical site since lush river vegetation and numerous waterfalls scattered along the river are in contrast to the bare cliffs and Mediterranean bush. Numerous waterfalls are main attractions of the Park, and the biggest and the most popular one is Skradinski Buk which consists of several smaller waterfalls and small lakes separated by tufa barriers, and one can also have a swim during summer in the near vicinity of the Buk. Besides stunning nature, the area of Krka river flow has many monuments made by man so one should definitely visit Visovac, small islet where Franciscan monastery is, and further up the stream, Krka Monastery is located as well. In the north part of the Park there is Burnum archaeological site where the remains of Roman military camp can be seen, and amphitheatre is the most interesting one. We must also mention many towers built along the entire flow of Krka river that serves to monitor the area. 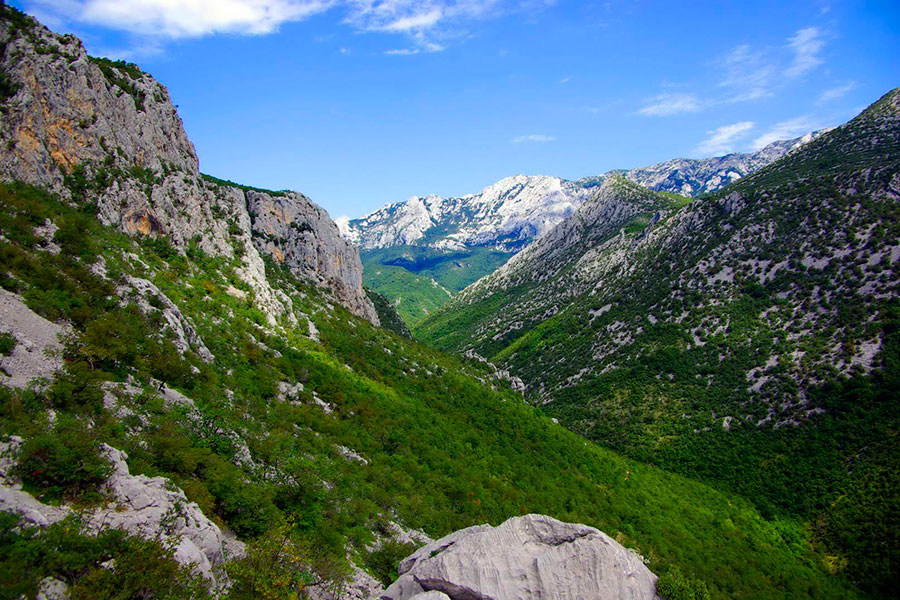 Paklenica National Park is the closest one to Vir, located in the south part of Velebit and it takes a only a short drive to reach it. The Park area includes canyons of Little and Big Paklenica, karst landscapes of Velebit and thick forests on the slopes of Paklenica, which is not a common scene on the otherwise rocky and bare Adriatic side of Velebit. It is an ideal destination for all hiking enthusiasts since there is a mountain hut in the Park, as well as several shelters and various hiking trails. Paklenica is also a globally renowned free climbing destination with several spots, the most popular being Anića Kuk with several climbing routes. Another attraction is a bunker built during the Cold War tensions as a shelter for the political elite of the former country, but it has never been finished. Today the space is refurbished and opened for visitors, and it includes a bar, museum, souvenir shop and conference room. Interesting memory of past times exists in a form of “mirila”, unique stone memorials which were made on a way to a cemetery, when a stone was put on each side of a deceased person. Although deceased people were never buried where “mirila” were left standing, the location with “mirila” was always regarded more important as it was believed that the deceased person’s soul dwelled there. 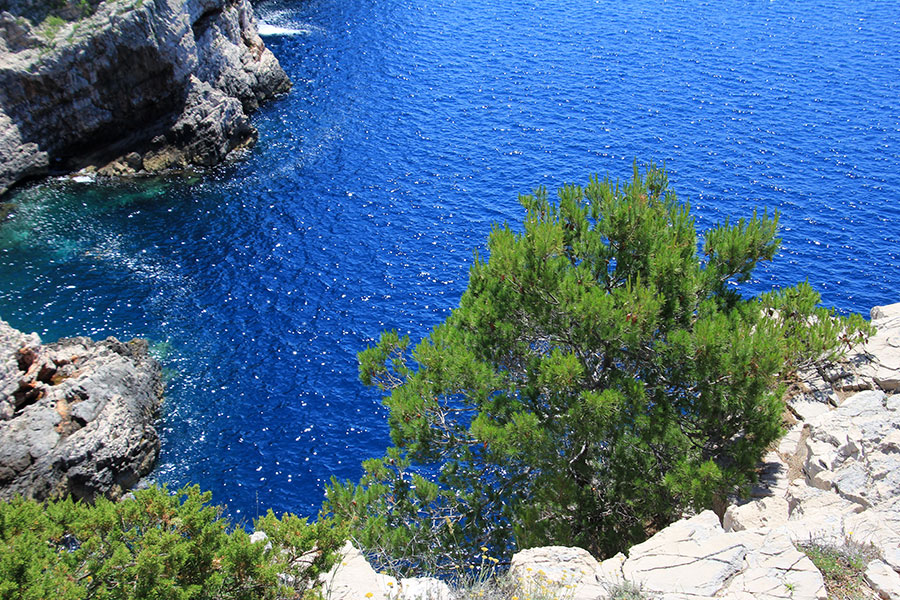 Kornati archipelago is Croatian National park situated in the central Dalmatia, in the waters west from Šibenik. More than a thousand islands, islets and rocks create this beautiful string of stone pearls scattered across the blue sea surface and this is an ideal destination for all boat trip lovers. The largest island is Kornat, and the archipelago got its name after it. Visiting by boat gives the opportunity to explore all the hidden corners of Kornati, and scuba diving trips with some of the local diving clubs are real treats for those who fancy sea underworld since Kornati sea bed is pretty lively. This destination is also very popular among the yachtsmen that sail for days in the archipelago and enjoy its beauties. There are several restaurants on Kornati that offer delicious dishes and excellent wines. Although the archipelago is uninhabited today, in the past it was quite dynamic area, the shepherds stayed here, and fishermen and seafarers used the coves as a shelter during storms. A reminder of the past times are the remains of Byzantine fortress Tureta from 6th century and early Christian basilica in its foot. 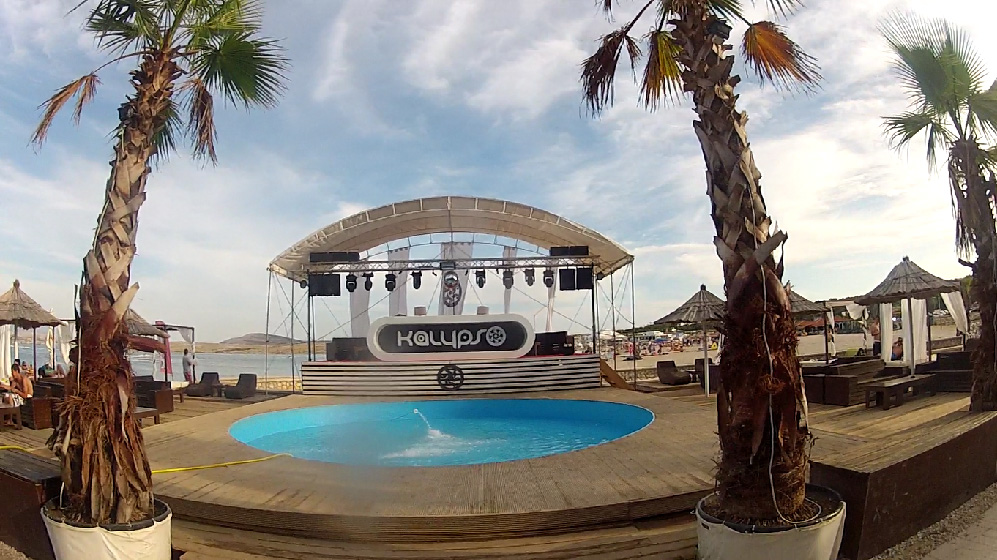 On the island of Pag, which just like Vir connected by bridge with the mainland, right next to the small town of Novalja Zrće beach is located. Zrće has been worldly renowned party destination for years. Numerous clubs set on the very beach, nearby wood and clean sea make an excellent combination of nature and fun, and every summer many popular DJs from all around the world are provide great musical experience and outstanding parties. The vicinity of this destination is great for those visitors of Vir who wish to party as it takes only an hour drive to reach it from Vir.